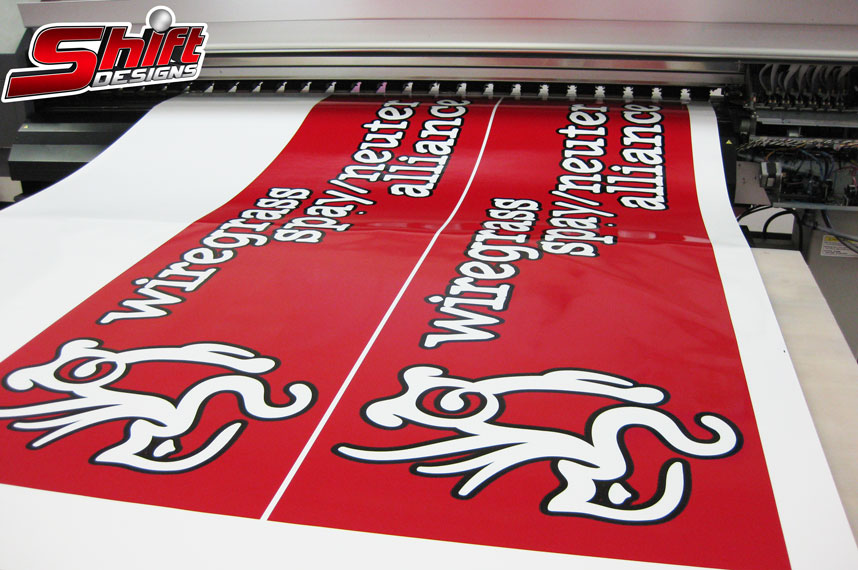 The Wiregrass Spay and Neuter Alliance is a non profit group that is dedicated to controlling the over population of cats and dogs in the wiregrass area. They teamed up with Mgruff the crime dog for an entry into the National Peanut Festival Parade. Long time member Bryan Applefield Suggest they use his horse drawn carriage as the entry. Mr. Applefield has two of the most magnificent Clydesdale Horses we have ever had the chance of meeting. We all said that we remember seeing them at Busch Gardens, but man they didn’t seem that big. Mr. Applefield invited everyone at Shift Designs out to his farm to meet the horse and have a look at his carriage. The alliance wanted to use the carriage in the parade, but they also wanted to be able to send a message with their entry. We went over a few ideas, and finally landed on static clings. The carriage has the candiest red paint job, so Mr. Applefield did not want to attach anything that would leave a residue behind. Static cling can be attached on the inside of windows, of even exterior paint jobs. We broke out our colorimeter to match the paint of the carriage, and got to work. We came up with a design that incorporated their logo, along with their turnover rate. We used the color picked with the colorimeter as the background to give the illusion that the design was painted right on the carriage. The Wiregrass Spay and Neuter Alliance was even nice enough to let us put our Shift Designs logo on the back of the carriage to give us a little advertising plug in the parade. If you are interested in having your pets spay or neutered, you can fin the Wiregrass Alliance at www.wiregrassspayneuter.org More Pics to Come!

This site uses Akismet to reduce spam. Learn how your comment data is processed.